Today, we provide our first update since the release of our Q2 2021 progress report two months ago. Though we outlined in the report that the external communications we release to you, our community, would be less frequent, our work rate and dedication to executing our mission remains – in fact, we are even more driven, especially considering just how much the company has evolved over the last four months. 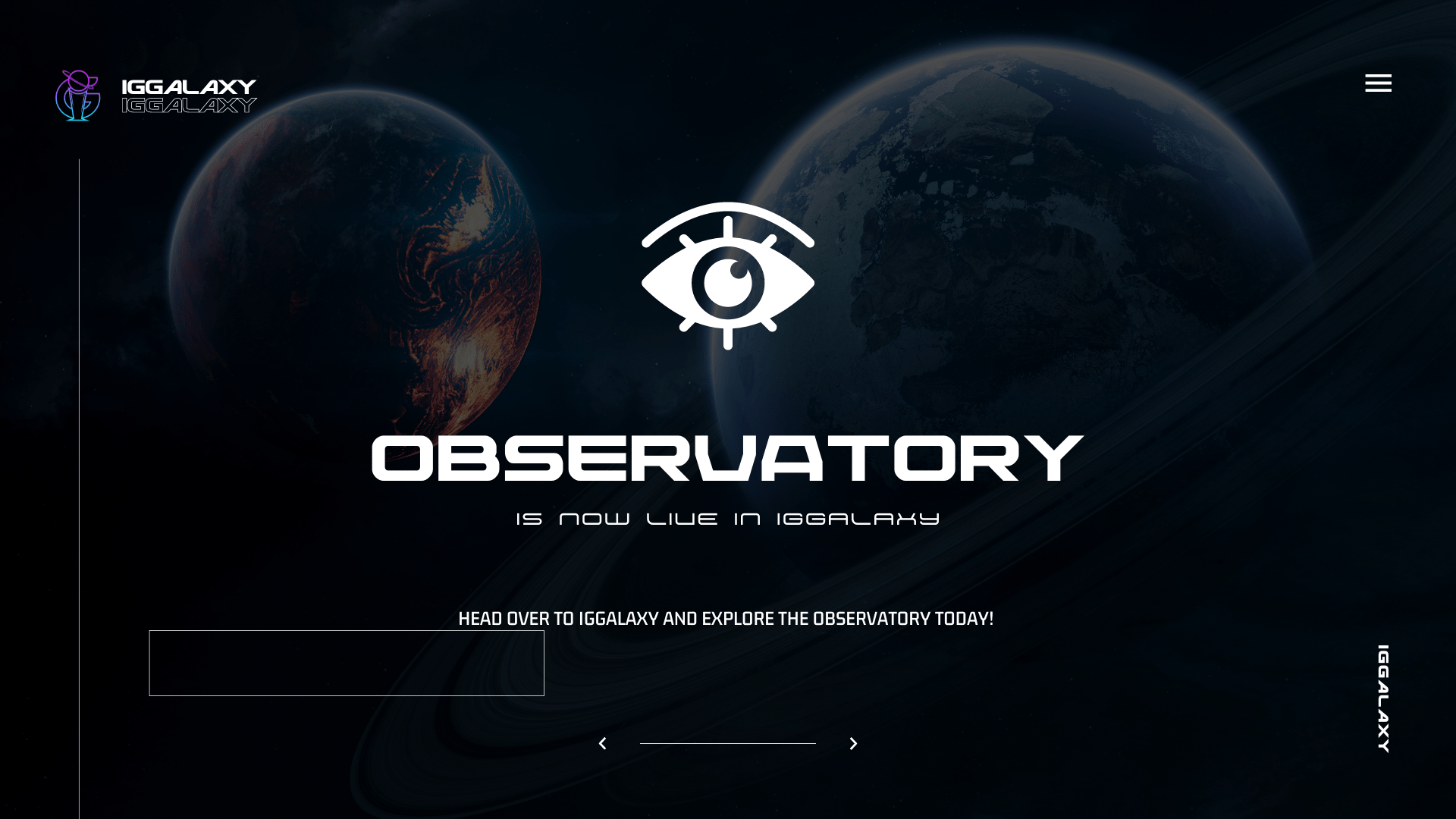 So, with that said, it is with great excitement that we can unveil the very first iteration of IGGalaxy’s Observatory; the space where you will be able to view your favourite streamers, gamers, and all live competitions!*

*The viewing of live competitions will depend on gamers streaming their matches during IGGalaxy esports tournaments.

For those of you that are new to IGGalaxy, our Observatory will be a vital component to IGPlay. As mentioned above, it is a feature that will allow all Galacticans to keep up with esports and, more generally, gaming video content (GVC) on Twitch.

If you love watching GVC on Twitch, or indeed have a great passion for creating and sharing your own, then look no further than the Observatory! With over 100 esports tournaments each month, 2.4 billion gamers worldwide, and live content refreshing every 60 seconds they’ll be more than enough action via IGGalaxy's Observatory to meet your needs!

With v1 now live, let’s check out all you need to know!

Why is Twitch only available?

Though our Observatory will eventually be compatible with other popular streaming platforms, this is only the very first iteration. Just as many of you have witnessed IGPlay evolve since its initial release in December 2019, so too will the Observatory.

This first-version release will give our development team a valuable opportunity to stress-test the feature, and our newly established product team the chance to listen to feedback and optimise the feature. When appropriate, we will deploy later versions which will offer much greater functionality.

Where can I find the Observatory?

You access the feature through the eye icon on the navigation bar.

Can I stream directly?

The first version of the Observatory will not allow IGGalaxy gamers to publish their streams to the platform, but the filtering of IGGalaxy streams (through Twitch) will be available in later releases.

What is available in this release?

*This doesn't include BGMI.

What is the vision for the future of the Observatory?

Aside from having the ability to watch GVC on Twitch, in time, we will also provide Galacticans with the ability to tip IG Gold (IGG) tokens, NFTs and other whitelisted cryptocurrencies to their favourite content creators.

Furthermore, IGGalaxy is developed for, and co-created with, our community. As users of the feature, Galacticans will be able to interact with one another via chat systems, leave comments and rate gameplay, all of which will add to our uniquely rich and thriving ecosystem. 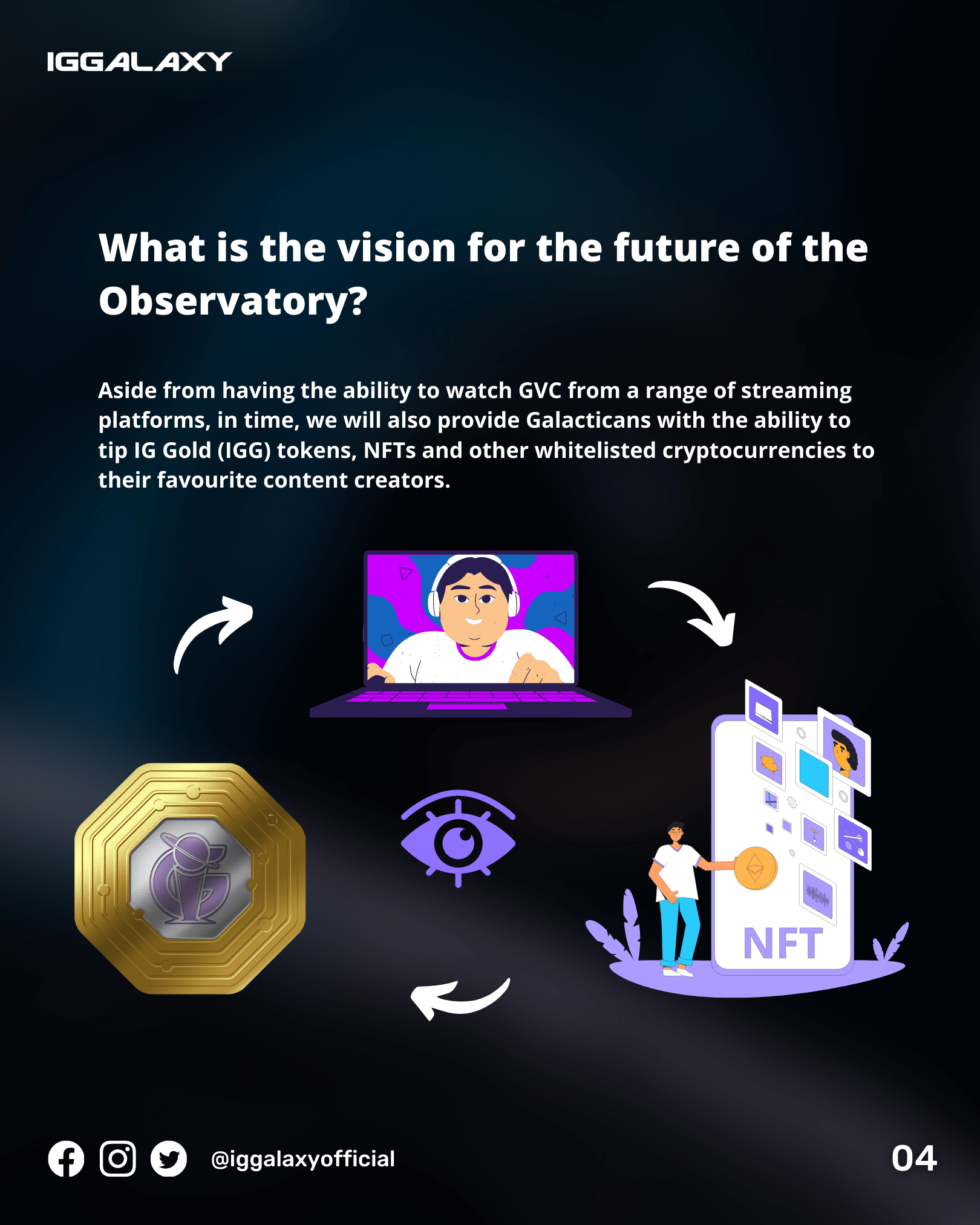 Are you ready for an explosive end to the year?!

Whilst this is an undeniably huge milestone, there are certainly much more exciting milestones that will soon become clear over the remainder of the year.

The first of which is a significant revamp of our product development team. Two months ago, we welcomed a new addition to the IGGalaxy family, as Izzie Johnson became our Product Owner. Over the coming weeks, we will welcome a new Full Stack Developer to join our highly talented development team, which will no doubt greatly enhance the speed at which we are able to test and deploy further features.

Speaking of features, we are making tremendous progress with the launch of our Tournament Creation Module (TCM) and look forward to sharing more on this in the near future!

As always, we want to thank you for your continued support and encourage you to continue spreading the word of IGGalaxy as we march on towards taking the esports landscape by storm!

A Month In Review at IGGalaxy